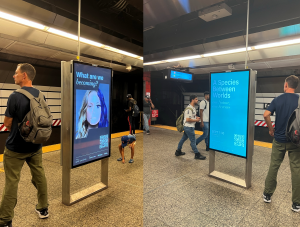 An efficient way to elevate your OOH advertisements is the inclusion of one simple, yet effective image: the QR code. With a simple swipe-and-tap of their device, QR codes allow for a direct connection to your consumer.  In addition, QR codes are a powerful attribute to outdoor advertising. Many people are active commuters who have minimal time to interact with your ad. Therefore, affording them the ability to access information on their own device is essential for any campaign. QR codes act as agents of information and can direct consumers to any information of your choosing. A website, contact information, or social media platforms are some examples of where to guide your consumers.

An Example of Effectiveness

The only time people might actually enjoy watching commercials is during the Superbowl. There is one advertisement that aired during the 2022 game which generated the most buzz—even without the big budget or big-time celebrities. The commercial featured just a single QR Code that bounced around the screen, accompanied by neon lights and dizzying arcade music. The advertiser was Coinbase, a cryptocurrency company who had more than 20 million hits on its landing page in one minute after its commercial aired—and subsequently, crashed the app. The simplicity of the ad compelled millions of viewers to “solve the mystery” of the advertisement. By scanning the code, viewers caused the app to skyrocket from 186th to 2nd place on Apple’s App Store. Coinbase’s experimental advertisement demonstrates the effectiveness of QR codes in campaigns—even if it is the only thing a viewer may see!