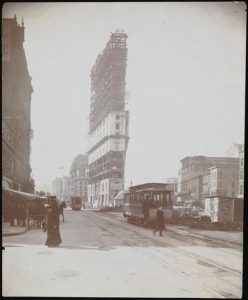 What we call Times Square today, was originally called Long Acre Square. This used to be a place for candle making and horse stables. As we became more aware of the capabilities of electricity, theatres an street lights were added throughout Long Acre Square. The owner of The New York Times built the Times Square Tower located between Broadway and 7th, and 42nd St and 43rd St. Above all, this building was the second tallest building in the city at the time. In spring of 1904, he Mayor renamed this fast growing area to what we know today as Times Square.

At the end of 1907, people gathered in Times Square to celebrate the coming of the New Year. restaurant workers and local business men were dressed in hats that were made of lightbulbs in the shape of the numbers 1908. These battery powered hats were activated when the clock struck midnight. In addition, there was a firework display above the Times Square Tower as well as a one of the first NYE ball drops. This ball was constructed of iron, wood and up to 100 lightbulbs, weighing about 700 lbs.

How Did People Get There?:

When the Interborough Rapid Transit Company (IRTC) was created, it generated lots of foot traffic throughout the square. This increase in foot traffic helped raise the real estate value and bring in more potential profit. In 1905, the IRTC brought in almost 5 million passengers through the Broadway & 7th Ave station. Today, as technology improves, there are more transit opportunities for passengers such as the the bus or subways.

During World War II, Times Square reached a drought. The only way businesses were able to attract customers was through peep shows, prostitution, and cheap restaurants. Therefore, this version of the square attracted many adult customers. However, in the late 1980’s, they began to rebuild its brand. The local companies removed any evidence of prostitution and drug related acts and built new establishments. These stores and theaters were family and children oriented, ultimately attracting many new consumers. As new businesses’ formed and the square attracted more tourists, this area became prime real estate for advertising.

Above all, the NYC Bowtie has always been prime real estate for advertising. One of the most famous billboards in Times Square was seen from the mid 1940’s to the mid 1960’s. For example, this ad displayed the cigarette brand Camel. In addition, this billboard utilized special effects to make the man in the billboard appear to be blowing smoke every few seconds. As technology improved, more billboards fill the streets of Broadway and 7th. For instance, we now have over 5 digital billboards that reach heights up to 20 stories tall. With an average of 1,500 businesses, this area brings in over 174 million pedestrians annually.