Ram and his team needed to pause several of their campaigns and assure clients that they would still be available after the quarantine period was over. And while he acknowledged the economy and his industry was not bouncing back to the pre-pandemic normalcy, he expressed confidence in keeping Inspiria in motion.

“What we’re focusing on is essentially continuing to be a great company,” said Ram in a recent interview with Westfair Video Conversations, the YouTube channel for the Business Journal.

“Luckily, we had a good balance sheet and we run the company responsibly. And now it’s a question of how do you move forward.”

One area where Ram is pursuing at greater depth is digital signs, observing that the U.S. has been catching up to other nations in embracing this format.

“Europe is definitely ahead of us, as is Asia for a lot of advertising and media,” he said. “We’re going a lot more digital converting inside transit centers and very, very large billboards to the likes of which we haven’t seen before. We’re talking nonstress, high-quality, Times Square-level size billboards.” 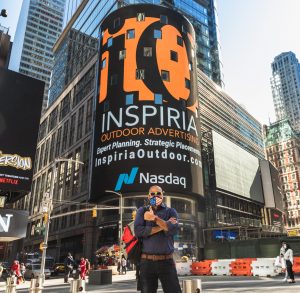 Ram sought to practice what he preaches earlier this month when he arranged for a digital advertisement for his company on a seven-story billboard in Times Square. The message appears to be working, as he noted he is planning strategies with companies that are looking to advertise only in Times Square.

Why would companies focus their advertising strictly in the oversized platforms in the heart of Manhattan?

“People could take photos or they can use it on social media,” he explained. “And this happens all the time. We are doing the campaign for a rum company out of Miami; and that one is a 28-day campaign. But their goal is not only to grow the brand, because Times Square is not just tourists — a lot of people work in that area now. We have people calling us. They want to buy a billboard just so they can take their photo in front of the billboard.”

Yet despite the XL-size of the billboards and having them in one of the priciest media markets, Ram stated that “the cost of advertising outdoor is probably one of the greatest surprises, meaning it’s a lot more affordable than people think. And that is one of the pleasures you have when you speak to a client about it.”

For Ram, the brilliance of outdoor advertising — either the state-of-the-art digital signs or the old-school stationary image on vinyl and paper — is that “you can’t fast forward it, you can’t skip it, you can’t delete it.”

“The greatest scenario is people do outdoor in concert with other media formats,” he said. “When somebody sees your ad outdoors, then they see it in print and then they listen to it on the radio and then they see it on social, the power is not one plus one equals two, it’s one plus one equals three — you keep on having that formula to the point that outdoor can increase the effectiveness of a lot of other media formats by 200% or 300%.”

While Ram said that consumer outdoor advertising was “an easier conversation” to pursue with companies, he is eager to further take on additional B2B projects.

He pointed to his recent work with New Jersey Turnpike-based billboards for Domino’s seeking drivers with CDL licenses. He has also coordinated several messaging campaigns from financial services companies thanking frontline workers — a sincere act, to be certain, but one that keeps the corporate brand front and center.

“The banks are not as interested in you or me opening up a checking account, but they are interested in us opening a business account,” he said. “They want to convert those people … because there’s a lifetime of value in that kind of client.”

As for the post-pandemic months, Ram is waiting for the trade conference circuit to come back.

“We had several conventions at the Javits Center that were canceled or postponed,” he said.

“We had another one in Las Vegas, which was B2B. If you had a conference targeting people that are in the software field, they wanted to advertise to everybody as they come in to the convention centers in Vegas to know that they’re going to be there. We execute those all over the country and, unfortunately, that’s going to be limited for a little while. But it will come back.”